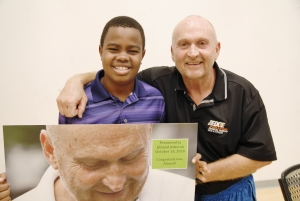 A King Streeter since Preschool, Ahmed Adan, 9th grader at Burlington High School, was presented with the 2016 Jake Agna Award on October 18, 2016. Check out the photos on facebook.

The Jake Agna Award was established in 2011 to celebrate the 10th anniversary of Jake Agna’s Kids on the Ball program. Modeling all that Jake brings to the tennis court each day, the award is intended to highlight a King Street Center youth who exhibits a high level of leadership, engagement, curiosity, humor, teamwork and respect for self and others.

During the award ceremony, Jake Agna described Ahmed in this way, “I can see see in the last couple of years he turned the corner. He was up & down a lot. When things didn’t go well, he would get upset. That’s normal. But, to be a good player, you’ve got to play the next ball. Now, he gets over things quicker and focuses on the next ball. It’s rewarding to see a person grow up to be a good person. Ahmed has learned so much about himself. He is starting to see that when opportunity comes, he’s ready to take it. He won the state championship! He understands he has to keep on trying. I don’t have to worry about him trying anymore – he’s trying all the time. He’s got an understanding. He’s on the road to doing great things. Being around him inspires me.” 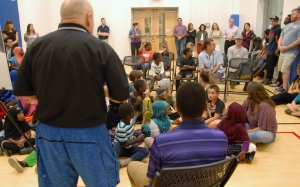